These guidelines have been prepared to assist those who are arranging a function to which Her Excellency the Governor has been invited, both to arrange the function and to provide the information sought by Government House.

It is essential that the information sought in the external function briefing sheet and in these guidelines, as well as speech material, be provided by the date specified, as Government House staff are often dealing with several functions at any time.

A written brief is prepared for every function attended by the Governor, based on the information provided by the host of the function.

A copy of the final brief will be sent by the staff at Government House to the organisers before the function.

The Governor will normally be attended by her Aide-de-Camp (during office hours) or one of her Honorary Aides-de-Camp (usually on evenings and weekends).

The name and contact details of the person attending the Governor will be included in the final brief.

The Order of Dress for the Governor should be that specified for the occasion in the invitation or otherwise made known to the people attending the function.

If decorations are to be worn this should be specified in the invitation.

If any special clothing is recommended for safety, climatic or other reasons this should be specified.

The Governor makes every endeavour to arrive precisely on time.

Note that announcements for the arrival of Her Excellency and Professor Chalmers will vary depending upon the venue and the surrounding circumstances and will be clarified in the brief which is prepared for each event.

Arrival when guests are seated:

Arrival when guests are standing:

The host(s) for the function (and their partners if appropriate) should greet the Governor and Professor Chalmers at the car upon arrival.

The following information should be provided about the host(s):

The names and official positions of any other people who will be presented to the Governor before the function commences should be listed, giving:

Those presented would normally include executive office holders of the host organisation, principal guests and dignitaries (eg. Ministers, Councillors etc.) and their partners, where appropriate, and those who sit at the official table or who will be on the dais at a ceremony or opening etc.

The presentation of such people should, where possible, take place in a foyer, ante room or at the entrance to the venue, rather than in front of the other people attending the function.

If other special guests are present, but are not being presented, it would be appreciated if a list of these guests could also be provided.

It is usual for the host to present guests to the Governor, and to escort the Governor when mingling with guests.

Please advise in what part of the venue the function is taking place.

Please advise if it is indoors or outside, in the open or in a marquee etc.

Please advise if it is in a dining room, a reception room, a conference room, a lecture theatre, a hall, a theatre, a classroom, a church, a boardroom etc.

Generally, the function should be timed to commence shortly after the arrival of the Governor, allowing time for presentation of special guests (about 5 minutes).

Other guests should arrive before the Governor arrives.

Whenever the Governor is seated at a function, a seating plan should be provided, as an attachment to the function briefing sheet.

The Governor should be seated on the host's right-hand side.

To avoid confusion, place cards should be used at the official table and on stage seating. Place cards should merely give the title and name of the guest; letters indicating decorations or other awards are not included after the name.

When seated at a tabled function, the Aide-de-Camp or other person attending the Governor should be seated where he or she is able to see and be seen by the Governor, but not at the official table.

When seated in rows, the Aide-de-Camp should be seated directly behind the Governor.

Where the function is a Church service, the Governor and her Aide-de-Camp or other accompanying person should occupy the front left-hand pew (when facing the altar).

The Vice-Regal Salute is the first four and the last four bars of "Advance Australia Fair".

The Vice-Regal Salute may be played live (ie: on musical instruments) or using a recording over an adequately amplified public address system.

The Vice-Regal Salute should not be played when the Governor is walking. It is played when the Governor has reached her position at the dais, podium, seating or table and all the accompanying party are motionless. [It can be embarrassing if the salute is played too early, as protocol requires the official party to stand to attention for the salute, wherever they may be.]

Requests for the Governor to make a speech should be indicated when the invitation is issued. Unless it has been agreed at the time of accepting an invitation, the Governor will not speak at a function.

The Governor does not usually propose or respond to toasts.

Where a speech has been agreed, material to assist in preparation of the speech must be provided.

If there are to be other speakers before the Governor, Government House is to be advised of the subject matter on which they will speak, to avoid overlap.

At a function where the Governor will speak, it would be appreciated if an adequately illuminated lectern and a public address system could be provided.

Departure when guests are seated:

•    Ladies and gentlemen, please stand.  Her Excellency the Governor and Professor Chalmers are now departing.

Departure when guests are standing:

•    Ladies and gentlemen, your attention please. Her Excellency the Governor and Professor Chalmers are now departing. 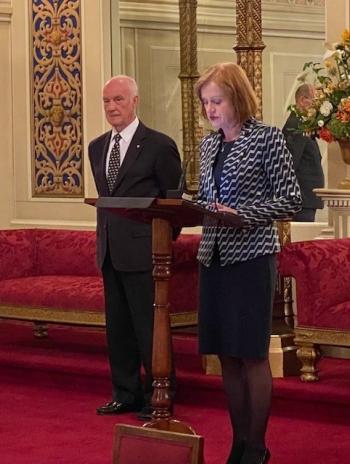 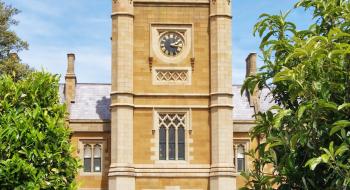 Requests for Functions at Government House

The Governor and Professor Chalmers are pleased to consider requests to host events at Government House.
Read more

Invitations for the Governor and/or Emeritus Professor Chalmers

The Governor and Professor Chalmers are pleased to consider invitations to attend events.
Read more